Think of the one in Stephen King’s It. Or Insane Klown Posse. Or Gene Simmons coughing up fake-blood in Kiss. Or Heath Ledger’s or Jack Nicholson’s Joker turns in the Batman flicks. The list goes on and on. Clowns often freak people out. There are many reasons I’m sure, but my reason for clown-o-phobia is that it seems like sometimes the fakery involved can take the fun hostage. Make-up and curly wigs and big red smiles are alright in very small doses I guess, but when they come at you with a raspy laugh and contorted-balloon animals and an uneasy sense of privilege (I’m a clown… You just have to love this) I get spooked.

I don’t really know or understand Raymond’s reason for loving clowns. I think it might have something to do with spectacle and irony. Raymond patched together his own unique blend, toning down the clown aspects (he wore no clown make-up or wigs and really never laughed a raspy laugh or contorted balloons into animals as far as I know). He tempered clownishness with construction-worker dignity, and in that mix, both in costume and demeanor, is where Raymond found his identity I think: a spectacular court-jester weirdness merged with a down-to-earth, let’s-just-get-this-job-done intensity. He wore the clown collar and the hard-hat, striped clown PJs with work-boots and a tool-box. The originality creates the mythology. He was a clown through the looking glass. Alice saw him on her way to the tea party.

One aspect of Raymond’s clowning might come from his Native American heritage. On the website charliethejugglingclown.com, Bruce Johnson writes about “Native American clowns,” and how many tribes across Northern America had clowns as part of their sociological structure. Johnson writes about one aspect: The Cheyenne tribe has Contrary clowns. They would walk about the camp on their hands, ride horses backwards, shoot arrows back over their shoulder, and do many other things wrong. When they came to a stream, they would take off one moccasin, and then hold up the bare leg as they hopped through the water. In time of battle, they would revert to doing things the normal way. The other tribes feared the Contraries the most, because they were the most skilled warriors. Contrary clowns are shown in the movie Little Big Man.

Let’s just say Raymond probably was one of our most skilled warriors. And leave it at that.

(Above: a “scary clown” photo I found by googling “scary clowns,” and a photo of a Native America clown mask of the Nulth-Ma tribe on the Charlie the Juggling Clown website. I’ve provided a link to that site on the links list for more info about Native American clowns…) 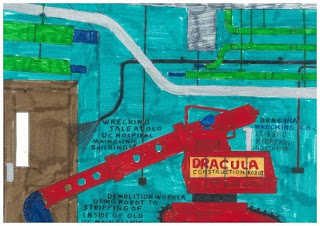 One thing Raymond Thunder-Sky did for me is change the way I look at things, especially buildings and the space around them. There is a mystery about abandoned malls and restaurants and banks and schools, those spaces that await demolition with patience and a sort of blankfaced bravery. Raymond’s drawings discover and aestheticize that “emotion” (I guess buildings can have emotion) without a lot of heavyhandedness or preciousness. Raymond’s line is distinctive, fashioned usually with a ruler or protractor, but his drawings never have the feeling of inevitability, just a sense of purpose. The straight edge also gives his work a nervousness and a compassion somehow: the drawings are vestiges of his search for a sort of tranqulity born from loss and what is about to lost, and then what is going to replace it. The energy of his vision is honesty merged with hope, and a dead-eyed conclusiveness. He writes on most of his drawings what is going away and what comes next without any poetic bull-shit. Just the facts. He was a busy man.

So today I look out and see where I live: Forest Park, Ohio, center of the dead-mall universe, a cancatenation of closed-down capitalism (ghosts of Fuddrucker’s, Texas Roadhouse, the Mexican place that was once a Boston Market, Hollywood Video, Cincinnati Mall, K-Mart, a used car lot, etc. haunting the landscape beside 275). Raymond lived here too for a while in the late 90s. He would love imagining all that dead space being ripped to shreds. I do too. The buildings are corpses, but they never die. Not zombies though, just cement and aluminum and wood and plastic remnants still in the shape of what they once were. Raymond would imagine a Dracula Construction Robot coming to town, terminating those sad essences, erasing what business-people made, in order to replace it with a CardTrick ClownSuit Factory, or a Richard Brightfire Thunder-Sky freeway (his dad’s name), or a big red-and-white-striped circus tent filled with the sound if calliope music.

Raymond gives me hope because he looked at the world the way it is. He documented it precisely. But then he demoilshed what was there and opened himself up to his own Utopian dreams.

He was a construction worker. He was a clown. He was an artist. But really he was just a plain old workaholic, digging through his own dreams to find a reason in all that destruction, poetry in all that we lose.

Above: Forest Park’s ghosts (an abandoned Texas Roadhouse, and an aerial view of the almost-defunct Cincinnati Mall), and one of my favorite Raymond drawings.