The next show at Thunder-Sky, Inc. is called “Ice Ice Baby!  New Works by Bob Scheadler and Mike Weber.”  The inspiration for the sculptures, paintings, photographs (one of which is pictured above — a photo by Bob Scheadler titled, “Ice 3090”), and prints is ICE.  One of the reasons we established Thunder-Sky, Inc. is to ensure that Raymond’s memory and legacy live on.  So how does “Ice” fit in with this mission?

This is from an article written by Steve Kissing in Cincinnati Magazine, circa 2006:

Over the course of his life, Raymond [worked] at Goodwill Industries, separating and organizing donated items; in food service at the Westin Hotel, where his knack for creating ice sculptures was discovered; and as a general laborer for Ogden Entertainment, the outfit that manages food service and other matters for the Cincinnati Convention Center. According to Higdon, Thunder-Sky could toss around eight-foot banquet tables like they were sheets of cardboard. During his decade-long tenure with Ogden, he missed only three days of work due to a bad cold. Such devotion to hard work didn’t help his poor health, and in 2002, his varicose veins burst, causing internal bleeding and nearly killing him. He ended up in a west side rest home for four months.

The night of the opening we’re going to try to have a Raymond-shaped ice sculpture.  January 7, 2011… 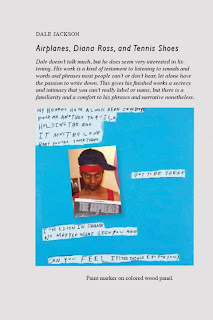 Dale Jackson’s text-driven art is featured in the Spring 2011 issue of Jellybucket, the literary magazine at Eastern Kentucky University…  A six-page full-color insert!  This is Dale’s first publication…  And it’s nestled in among some great poems, essays and short stories.